Ode on a Grayson Perry Urn by Tim Turnbull 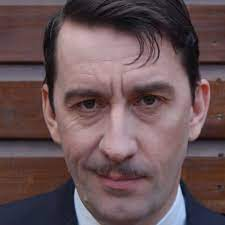 Hello! What's all this here? A kitschy vase
some Shirley Temple manqué has knocked out
delineating tales of kids in cars
on crap estates, the Burberry clad louts
who flail their motors through the smoky night
from Manchester to Motherwell or Slough,
creating bedlam on the Queen's highway.
Your gaudy evocation can, somehow,
conjure the scene without inducing fright,
as would a Daily Express exposé,

can bring to mind the throaty turbo roar
of hatchbacks tuned almost to breaking point,
the joyful throb of UK garage or
of house imported from the continent
and yet educe a sense of peace, of calm -
the screech of tyres and the nervous squeals
of girls, too young to quite appreciate
the peril they are in, are heard, but these wheels
will not lose traction, skid and flip, no harm
befall these children. They will stay out late

forever, pumped on youth and ecstasy,
on alloy, bass and arrogance, and speed
the back lanes, the urban gyratory,
the wide motorways, never having need
to race back home, for work next day, to bed.
Each girl is buff, each geezer toned and strong,
charged with pulsing juice which, even yet,
fills every pair of Calvin’s and each thong,
never to be deflated, given head
in crude games of chlamydia roulette.
Now see who comes to line the sparse grass verge,
to toast them in Buckfast and Diamond White:
rat-boys and corn-rowed cheerleaders who urge
them on to pull more burn-outs or to write
their donut Os, as signature, upon
the bleached tarmac of dead suburban streets.

There dogs set up a row and curtains twitch
as pensioners and parents telephone
the cops to plead for quiet, sue for peace -
tranquility, though, is for the rich.

And so, millennia hence, you garish crock,
when all context is lost, galleries razed
to level dust and we're long in the box,
will future poets look on you amazed,
speculate how children might have lived when
you were fired, lives so free and bountiful
and there, beneath a sun a little colder,
declare How happy were those creatures then,
who knew the truth was all negotiable
and beauty in the gift of the beholder. 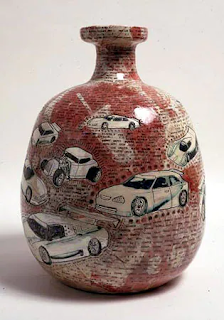 The Insider by Grayson Perry 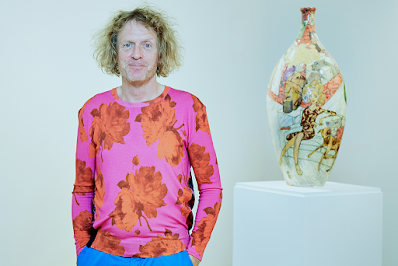 Grayson Perry
Posted by David at 16:29