What the Thunder Said by T. S. Eliot 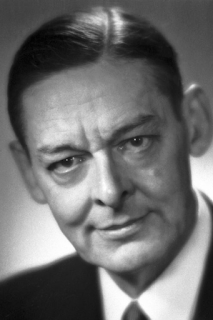 Who is the third who walks always beside you?
When I count, there are only you and I together
But when I look ahead up the white road
There is always another one walking beside you
Gliding wrapt in a brown mantle, hooded
I do not know whether a man or a woman
—But who is that on the other side of you?

What is that sound high in the air
Murmur of maternal lamentation
Who are those hooded hordes swarming
Over endless plains, stumbling in cracked earth
Ringed by the flat horizon only
What is the city over the mountains
Cracks and reforms and bursts in the violet air
Falling towers
Jerusalem Athens Alexandria
Vienna London

A woman drew her long black hair out tight
And fiddled whisper music on those strings
And bats with baby faces in the violet light
Whistled, and beat their wings
And crawled head downward down a blackened wall
And upside down in air were towers
Tolling reminiscent bells, that kept the hours
And voices singing out of empty cisterns and exhausted wells.

In this decayed hole among the mountains
In the faint moonlight, the grass is singing
Over the tumbled graves, about the chapel
There is the empty chapel, only the wind’s home.
It has no windows, and the door swings,
Dry bones can harm no one.
Only a cock stood on the rooftree
Co co rico co co rico
In a flash of lightning. Then a damp gust
Bringing rain

Ganga was sunken, and the limp leaves
Waited for rain, while the black clouds
Gathered far distant, over Himavant.
The jungle crouched, humped in silence.
Then spoke the thunder
DA
Datta: what have we given?
My friend, blood shaking my heart
The awful daring of a moment’s surrender
Which an age of prudence can never retract
By this, and this only, we have existed
Which is not to be found in our obituaries
Or in memories draped by the beneficent spider
Or under seals broken by the lean solicitor
In our empty rooms
DA
Dayadhvam: I have heard the key
Turn in the door once and turn once only
We think of the key, each in his prison
Thinking of the key, each confirms a prison
Only at nightfall, aethereal rumours
Revive for a moment a broken Coriolanus
DA
Damyata: The boat responded
Gaily, to the hand expert with sail and oar
The sea was calm, your heart would have responded
Gaily, when invited, beating obedient
To controlling hands

Click here to buy The Waste Land and Other Poems by T. S. Eliot 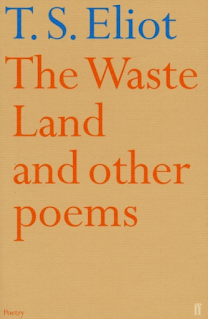