For the Union Dead by Robert Lowell 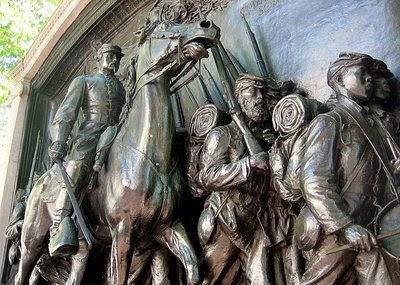 The old South Boston Aquarium stands
in a Sahara of snow now. Its broken windows are boarded.
The bronze weathervane cod has lost half its scales.
The airy tanks are dry.
Once my nose crawled like a snail on the glass;
my hand tingled to burst the bubbles
drifting from the noses of the crowded, compliant fish.

My hand draws back. I often sigh still
for the dark downward and vegetating kingdom
of the fish and reptile. One morning last March,
I pressed against the new barbed and galvanized

fence on the Boston Common. Behind their cage,
yellow dinosaur steamshovels were grunting
as they cropped up tons of mush and grass
to gouge their underworld garage.

Parking spaces luxuriate like civic
sandpiles in the heart of Boston.
a girdle of orange, Puritan-pumpkin colored girders
braces the tingling Statehouse,

shaking over the excavations, as it faces Colonel Shaw
and his bell-cheeked Negro infantry
on St. Gaudens' shaking Civil War relief,
propped by a plank splint against the garage's earthquake.

Two months after marching through Boston,
half of the regiment was dead;
at the dedication,
William James could almost hear the bronze Negroes breathe.

Their monument sticks like a fishbone
in the city's throat.
Its Colonel is a lean
as a compass-needle.

He has an angry wrenlike vigilance,
a greyhound's gentle tautness;
he seems to wince at pleasure,
and suffocate for privacy.

He is out of bounds now. He rejoices in man's lovely,
peculiar power to choose life and die-
when he leads his black soldiers to death,
he cannot bend his back.

On a thousand small town New England greens
the old white churches hold their air
of sparse, sincere rebellion; frayed flags
quilt the graveyards of the Grand Army of the Republic

The stone statutes of the abstract Union Soldier
grow slimmer and younger each year-
wasp-waisted, they doze over muskets
and muse through their sideburns…

Shaw's father wanted no monument
except the ditch,
where his son's body was thrown
and lost with his "niggers."

The ditch is nearer.
There are no statutes for the last war here;
on Boylston Street, a commercial photograph
shows Hiroshima boiling

over a Mosler Safe, the "Rock of Ages"
that survived the blast. Space is nearer.
when I crouch to my television set,
the drained faces of Negro school-children rise like balloons.

Colonel Shaw
is riding on his bubble,
he waits
for the blessed break.

The Aquarium is gone. Everywhere,
giant finned cars nose forward like fish;
a savage servility
slides by on grease.
Posted by David at 20:47

Email ThisBlogThis!Share to TwitterShare to FacebookShare to Pinterest
Labels: For the Union Dead